“The ice is melting – I do not have enough time.” 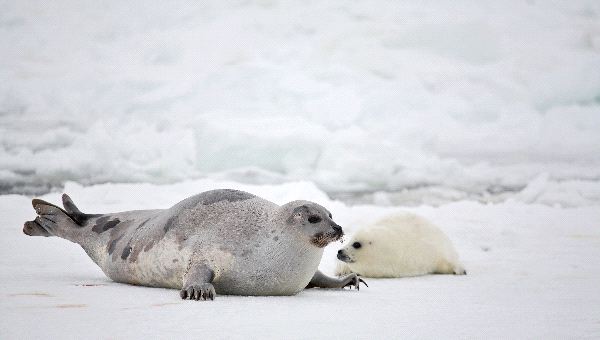 “I was born here on the ice, and I need to learn how to swim so I can survive on my own. But to do that, I need some time so that my mummy can teach me how to swim, eat, and survive on my own. Once the ice melts, she will have to leave me, and if I am not swimming before that, I will just drown. But the ice melts so quickly and I do not have enough time. I will die as will so many other little pups like me…”

The ice is melting, and it only needs about a degree or two of a rise in temperature for the ice to start melting. Climate change has caused more than those few degrees. Over the past century and ongoing, we have seen an unprecedented rise in temperature.

Up there in the globe is the ice, entirely out of sight and out of our thoughts. Despite that, it holds the keys to life on earth. For with the melting of this ice, life as we know it, is changing and not for the better.

Here is an example of how one type of animal is affected and meets its demise long before it even starts life.

The harp seal is fighting a race against time, and it is losing.

For the harp seal, the first ten days of its life are the only option that it has for survival – during these days, it is entirely dependent on its mother, and she will be leaving him along with all the other adult seals in just ten days. Once it is born, it has precisely ten days whereby it needs:

For these animals, they have come this far so they could be away from predators while they breed. Winter used to be long, but that is not the case anymore. And, as the ice is their home, they do not need to migrate and leave their young unless the ice starts melting.

Now, the ice starts melting so much earlier, and the Harp seal – just one of many such animals – needs to survive on its own as it mum leaves it. For those who have those ten days, they just might make it but for that little one born a few days later. His mum will leave him when he is only five or six days old. In 2017, the ice broke up so fast that the entire year’s pups drowned overnight.

She has to leave because the ice is melting, and there is no way that she will be able to protect him once she is gone. If the seal pup has not learned how to swim before he is abandoned, he will drown to death – and maybe a whole generation of them.

He has not enough time – will this little animal make it? – Most probably not, as well as hundreds of others like him, either Harp seals, seals, or other marine mammals.

Life is being lost to the climate changes that only we can put a stop to. Seals, whales, penguins, bears, to name just a few – #earth