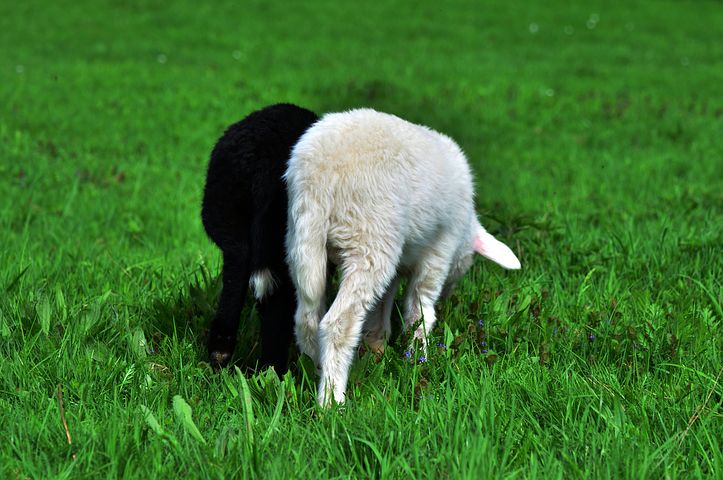 The Black Sheep – black everywhere is what we see. A sheep that will always be black, till the day it dies. Playing in the field, running and laughing, it knows not that it is black – but its friends and little playmates see that it is black. They shy away from him, disgusted that he is so black. They put a distance between them lest its blackness rubs in on them. But the little sheep is oblivious to what they are thinking, and it is still running, laughing, playing, and hugging its friends.

Together the sheep devise a plan, to make him white – but he is not party to all that is going on.

“If we make him white like us, then he will be good, and he will be our friend, and we can play with him without worrying that he will rub on us.”

So, they start by trying to wash him, make him clean – “but I am clean,” Blacky cries as they scrub him too hard until he hurts. “I wash every day in the spring until I glow with cleanness.”

Still, they go on until he is sore – they give up, but they are furious at him that he cannot be wiped clean, cannot be like them.

Plans go on, and they all fail until his fellows decide that he cannot be one of them, he is a stranger among them even as he is there in their midst – he feels it.

Then, came the big plan – “we will color him, make him one of us,” and the idea is such a good one that they are so happy, and they actually let him play with them as they get everything ready.

The day comes, and the paint is ready – they tie up his mouth, hands, and feet – for the paint is hot, and they don’t want him to run away.

As one, they lift him and immerse him in the paint – he cries, and his tears fall down his face. They beat him to quiet him up lest he messes up all their work.

When he is all covered up in white, glowing paint – they pull him out.

They are so happy that he is white like them that they don’t care that he is hurt an burned.

Dancing and celebration go on around him, all because he is like them now. Hours later, he is left alone – out in the cold – they have gone to get some rest from all their efforts.

Blacky weeps, “I am hurting, they hurt me, and left me alone.”

“I am white, I am alone,” “they couldn’t care less that I am hurt, but they are glad I am white.”

There is no logic to what he is in, but he knows that he has to go away to heal, and he does. As he heals, the paint falls off, and he is glad that he is just himself.

“I am alone, I need no one, and one day I will find a friend whom I will accept for any color that he is as he will accept me – I am Blacky, thank you very much, but I don’t care.”